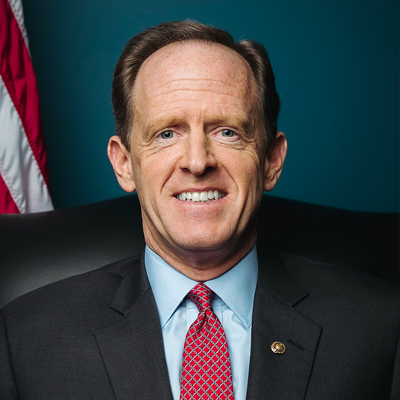 Our National Debt: Why Should We Care and What Can We Do About It?

Pat Toomey joined the U.S. Senate in 2011 on a platform of making our country a safer, more prosperous place to live, work and raise a family. He helped author the Tax Cuts and Jobs Act — the first comprehensive overhaul of the tax code since the 1980s. Senator Toomey is the ranking member of the Senate Banking Committee and a member of the Senate Finance and Budget Committees.

Watching policymakers in Washington for the past decade, some may question whether federal budget deficits even matter. From 2010 to 2019, the federal government ran deficits that totaled more than the previous 220 years combined.1 The response to the coronavirus pandemic added a single-year record of over $3 trillion in debt in 2020, and the Biden administration has proposed adding another $8 trillion-plus in just one term.2

Unfortunately, this has just been the rapid acceleration of an already unsustainable trend. In 2020, the ratio of debt held by the public to gross domestic product (GDP) reached 100% — its highest level since World War II.3 Unlike then, when unwinding the extraordinary war effort and our rapidly expanding economy brought debt back down to a manageable level, current laws have us facing ever-increasing deficits for as long as we have new numbers to count. 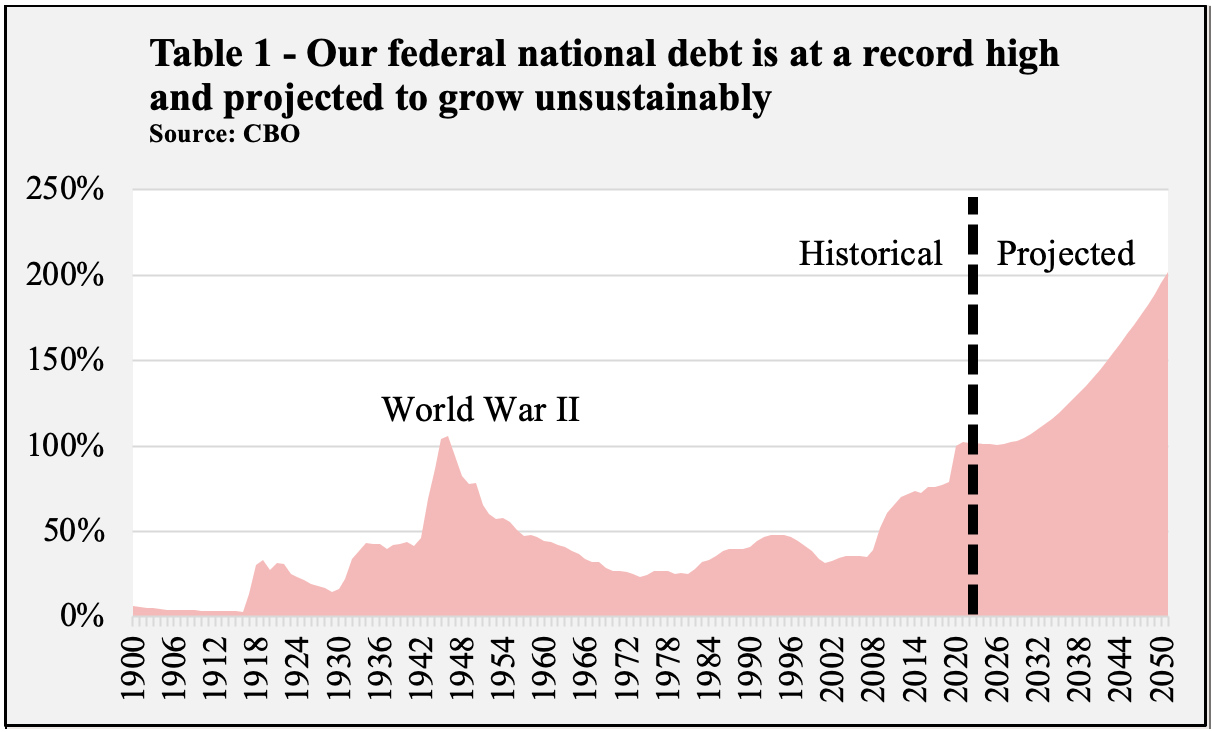 But to quote the late economist Herb Stein, “If something cannot go on forever, it will stop.” The main question for policymakers is not if our current rate of debt expansion will stop; it is when and how. At the current trajectory, government spending on interest on our debt will consume a larger and larger part of our collective output until the economy can no longer bear the cost. Today, we still have the opportunity to act proactively and implement gradual reforms of our choosing. But that window grows smaller every day. Alternatively, we can simply wait until the current trend results in an economic calamity, forcing those who follow us to choose from an even more limited — and unappealing — range of options.

Our annual federal budget deficit is the amount by which money going out of federal coffers (spending) exceeds money coming in (revenue) for a given year. Since our annual deficits are generally financed by issuing debt, the total national debt is roughly the sum of all previous years’ deficits. A quick look at historical and projected spending versus revenue shows our growing deficits are driven by a dramatic increase in spending relative to historical norms. As Table 2 shows, federal tax revenue has historically been relatively steady as a percentage of GDP over the past 60 years and is expected to remain so. Inadequate tax revenue is not the problem. This is a spending problem. 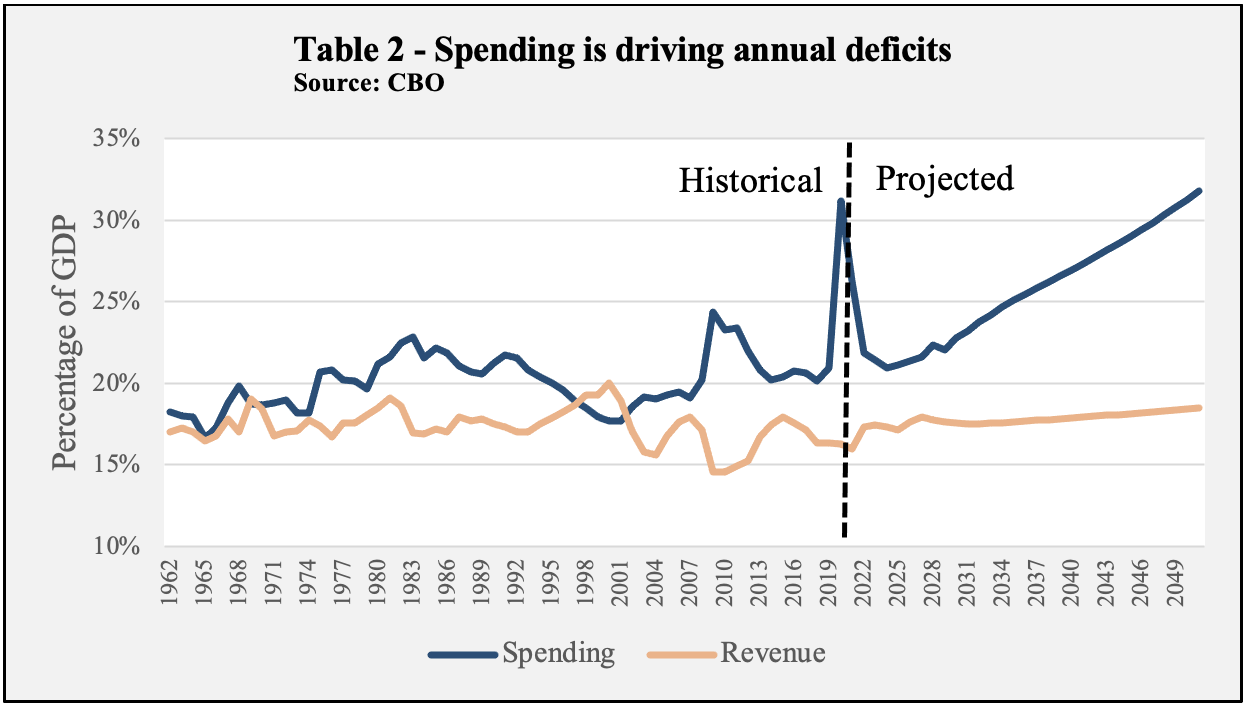 Surprisingly, some categories of federal spending, particularly defense spending, have actually declined over the past 60 years relative to the size of the economy. Spending on entitlements is a different story. Government spending on entitlement programs occurs automatically as a result of eligibility instead of through the appropriations process at the annual discretion of Congress. The largest three entitlement programs in particular — Social Security, Medicare, and Medicaid — have grown steadily and significantly, crowding out other priorities. They will continue to do so unless changes are made (Table 3). 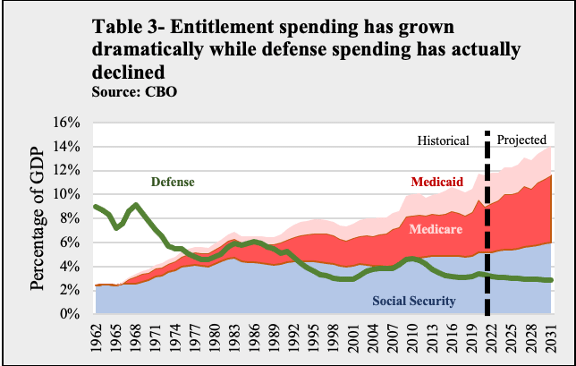 Another Administration Sticks its Head in the Ground

The U.S.’s decadeslong structural overspending problem, driven primarily by our entitlement programs, has been an issue that both parties have refused to address. It now leaves us with a dire fiscal outlook. Unfortunately, the Biden administration seems intent not just on ignoring the problem, but significantly exacerbating it.

In 2020, Congress passed five bills — each in an overwhelmingly bipartisan manner — in response to the public health and economic crises brought on by the COVID-19 pandemic. While widely regarded as necessary, these bills cumulatively added approximately $4 trillion to the national debt at a time when it was already at a record high in absolute and inflation adjusted levels and rapidly approaching a record relative to GDP.

Our rapidly growing mountain of debt did not deter the new administration’s spending ambitions. As their first major initiative, Democrats enacted a $2 trillion partisan wish list that was entirely deficit-financed, claiming it would rescue an economy that was already 10 months into an economic expansion and did not need rescuing. Despite having their narrowest House majority in more than 100 years, a 50-50 Senate, and a president who campaigned as a centrist unifier, Democrats followed this by proposing the largest expansion of the federal government since the New Deal. They have proposed creating massive new entitlement programs when we already know we cannot come close to paying the obligations of the existing programs – Social Security, Medicare, and Medicaid.

Why We Should Care

Unfortunately, it can often seem good politics to put off the hard choices. Explaining to voters why spending cuts are necessary is hard, and the exact timing of our debt reckoning is impossible to predict. But there is more urgency to this matter than most politicians are willing to acknowledge. If Herb Stein is right, then either the political class will have to rein in the excessive spending, or some outside force eventually will. While the former would inevitably be full of hard choices, it is the latter that we should really worry about.

Interest Rates Will Not be This Low Forever

It is easy to look at current Treasury yields — the interest rate the federal government pays to borrow money — and assume that the U.S. government can borrow at very low costs indefinitely. This is incorrect for two reasons. First, the United States currently has approximately $30 trillion of federal debt.4 This massive amount of debt is expected to cost U.S. taxpayers $331 billion in interest payments in 2021 alone5 — almost $2,700 per household at current record low interest rates.6 In 2021, interest payments alone will consume nearly 10% of all federal revenue collections.7 That is the good news. The bad news is that at some point interest rates will rise.

U.S. government interest rates can only stay low for long periods of time when the supply of debt is in line with demand and inflation is muted. Appetite for purchasing U.S. Treasury debt by investors will eventually be sated, and it will take ever higher interest rates to entice them to buy ever more bonds. Additionally, investors require a return that enables them to preserve the value of their investment. If inflation increases, interest rates will go up to offset the resulting debasement.

Higher interest rates directly increase the federal government’s cost of servicing its debt. For every half a percent increase in Treasury yields, the federal government’s interest expenses will rise by roughly $100 billion per year.8 The Congressional Budget Office (CBO) projects that the interest rate of 10-year Treasury notes will rise to 2.7% by the end of 2025, up from a rate of 1.6% in the middle of 2021.9 This alone accounts for $480 billion in projected future obligations over the next five years. However, as Brian Riedl of the Manhattan Institute has shown, a scenario as realistic as returning to the average interest rates of the 1990s would push our national debt to 300% of GDP (as even more debt is needed to cover the higher interest payments) before the college graduates of today collect a single check from Social Security.

Unfortunately, there is more bad news: All other interest rates are even higher than the federal government’s. Interest rates on everything from business loans to household mortgages have higher yields than Treasuries. This is the price investors demand for taking on the credit risk of other borrowers. If making mortgage payments is difficult now, imagine payments at rates where they were the last time the 30-year fixed mortgage rate soared with the rest of the rate complex in 1981 — at 18.45%.10

Monetizing the Debt Would Hurt the Most Vulnerable

There is one thing that the government can do that is even worse than borrowing too much money, and that is printing it. This is known as debt monetization and, as history has shown, it is a shortsighted approach that rarely ends well.

There is a saying in economics that inflation occurs when there is “too much money chasing too few goods.” By printing dollars to pay for fiscal spending, the government increases the supply of money by more than the supply of goods, thereby causing inflation.

From Germany’s Weimar Republic to modern-day Venezuela, when central banks turn on the printing press to finance fiscal deficits, disaster usually follows. When runaway inflation takes place, the effects are widespread and dire; prices rise for most consumer goods and services, from groceries and clothing to haircuts and tuition. As the prices of everyday needs go up, it is those with the least disposable income that have the least ability to cushion the impact and end up suffering the most. In contrast, the most well-off are typically shielded, as the assets that comprise most of their wealth (such as real estate and stocks) tend to keep up with inflation.

What Can We Do About It?

In order to start getting our debt problem under control, the first step is very simple: When you are in a hole, stop digging. New middle-class entitlements, periodic cash payments to people regardless of need, and other spending proposals that would increase our unpaid obligations should be dead on arrival in any Congress that cares about the burden they are leaving for future generations.

Next, our major entitlement programs must be reformed in a way that makes them sustainable in the long run. If we act soon, this will not require an actual reduction in the payments received by American beneficiaries. Even in the aggregate, the programs can continue to grow. However, we need to ensure that at some point in the near future, these programs no longer grow faster than the rate of the economy as a whole.

For an example, take a look at how our neighbor to the north slowed one of their largest expenditures — federal expenditures on health care. In 2011, Canada announced that starting in 2017, it would tie federal health care spending to nominal GDP growth with a floor of three percent. Though the reduction in the rate of growth was originally proposed by Conservative Prime Minister Stephen Harper, his successor, Liberal Prime Minister Justin Trudeau has kept it largely intact. The results speak for themselves. Today, the parliamentary budget officer has stated that “fiscal policy at the federal level is sustainable over the long term,”11 largely due to these reforms.12

The crisis our country will face if we continue to ignore our rapidly accumulating debt is entirely predictable. Our current trajectory will lead to a future of self-inflicted damage, including rising interest rates and inflation, which is guaranteed to hurt most those who can afford it the least. Importantly, curbing the rate of growth of our spending now means we can avoid far more draconian measures later.