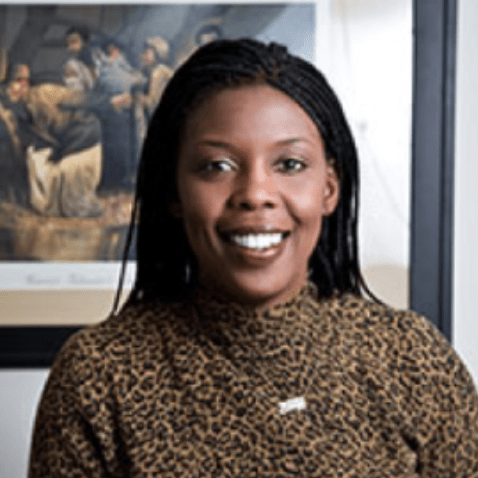 Star Parker is the founder and president of the Center for Urban Renewal and Education (CURE Policy), a nonprofit policy institute based in Washington, D.C., that fights poverty to restore dignity through messages of faith, freedom and personal responsibility. Star is a nationally syndicated columnist and hosts a weekly television news show, “CURE America with Star Parker” and a podcast called “Power, Poverty & Politics.”

As despair gripped our nation following the onset of the coronavirus pandemic and the killing of George Floyd, I decided to go into our nation’s most distressed communities with a message of hope and truth.

The organization that I founded, the Center for Urban Renewal and Education (CURE), has been working on policy issues dealing with race and poverty for 25 years. In 2020, we purchased billboard space in hard-hit cities across the nation and posted a short, time-tested message that strikes at the heart of what drives poverty.

The billboards showed a picture of a young black man or young black woman and said: “Tired of Poverty? Finish school. Take any job. Get married. Save and invest. Give back to your neighborhood.”

The billboard then refers to Proverbs 10:4, which says, “A slack hand causes poverty, but the hand of the diligent makes rich.”

This is a message delivered with care and love. It’s a message I know is true. In my youth, I lost sight of these truths and thus believed much of the narrative we hear today: that our country is racist and stacked against the poor.

As a result, my life spiraled. I got involved in criminal and drug activity, had abortions, and became dependent on welfare. A Christian conversion changed my life and put me on the path to personal responsibility.

I obtained a college degree in marketing and international business and started a business. The Los Angeles riots of 1992 destroyed that business, yet they also served as a springboard for the work I do in Washington, D.C., today through CURE.

This kind of intimidation and censorship has become all too common in our culture. But we must continue to speak the truth. The impact of the “success sequence” on poverty is well documented.

In their book “Creating an Opportunity Society,” Brookings Institution scholars Ron Haskins and Isabell Sawhill published their findings that those who follow three steps — finish high school, get a full-time job, and get married before having children — face only a two percent chance of being poor.

Brad Wilcox and Wendy Wang of the Institute for Family Studies followed on this work in their book “The Millennial Success Sequence,” published by the American Enterprise Institute. They observed that among millennials ages 28-35, there was a 53% incidence of poverty among those who did not follow these steps and a three percent incidence among those who did.

A Failed Legacy of Welfare-State Socialism

The roots of the welfare dependency we see today go back decades. When then-President Lyndon Johnson affixed his signature to the Civil Rights Act of 1964, the given assumption was that, although there was a new law protecting freedom — civil rights — for all, low-income black Americans were neither prepared to be free nor capable of being free.

A new era of big government ushered welfare-state socialism into communities, creating major new problems — mainly the decimation of families. Since the introduction of these programs, single-parent homes and out-of-wedlock births have tripled.

Today’s “progressives” want to blame racism for the persistence of problems in low-income communities. In some respect, they are right; it is their own misguided bigotry that refuses to accept that low-income Americans can and must be free.

In seeking to bring the failed welfare-state socialism of the broken parts of the country to the healthy parts of America, rather than the capitalism of those parts to the broken areas, progressives threaten to exacerbate this dependency, and therefore, inequality.

However, trillions of dollars in spending for the “Great Society” and other government policies since the 1960s have produced much more questionable results. Manhattan Institute scholar Michael Hendrix, among others, has demonstrated that government housing programs for the poor have largely failed to produce their intended outcomes.

If the federal government wants to help those with inadequate resources cover the cost of decent housing, giving them an unconditional voucher to use for private housing wherever they choose to live would be a much more effective and equitable policy. Such a policy would also give parents much better options in choosing where to send their children to school.

We can also make inroads in education. We know that the key to the success of our great American economy is freedom and competition. Competition is what produces excellence.

So how can it be that in a sphere where excellence is possibly more important than anywhere else — the education of our children — we don’t have freedom and competition?

Although the gap between high school graduation rates for blacks and whites has almost completely closed, it is still the case that too many blacks are graduating high school with deficient skills in reading and math and that far fewer blacks than whites are moving on to higher education.

This has meaningful implications for earning power.

In order to address gaps in educational achievement and earning power, low-income families need the resources to make the best education choices for their children.

Members of Congress have proposed some creative ideas to empower parental choice in education. Ideally, all federal education funds should be block granted to the states with instructions that they be provided on an equal basis for public, private or homeschool education.

At a minimum, Title I funds for low-income students should flow to local communities through the states and be distributed equally to students — regardless of the type of school they attend. Congress should also permit dollar-for-dollar federal tax credits for contributions that provide scholarships to low-income children to attend any school of their parents’ choosing.

More than 90% of funding for K-12 education is provided at the state and local levels. Therefore, it is imperative that state and local officials embrace the principle that money should follow each child to a school of his or her parents’ choice. Parents should get to pick the schooling that reflects their values, including private and religious schools, or homeschooling.

Education is about more than teaching children to read and write. It is about transmitting a worldview and a set of values that will define how our youth think and how they will live.

The Third Street Academy in Greenville, North Carolina, is a private Christian school for young men, almost all of them black. Emblazoned on the wall above the school’s entrance is a message that the young men take to heart:

“I am a Third Street Academy Gentleman.

God, my Father in Heaven, made me.

I am a child of the King, made in His image, and destined for greatness.

I am a Third Street Academy Gentleman.”

The people of Greenville proudly support the Third Street Academy, and the gentlemen who graduate from the academy continue to make them proud. Federal, state and local resources should be able to follow children to such a school if parents decide that is the best place for their children to learn and receive the character formation that will guide them through a responsible and prosperous life.

According to Susan Rice, President Joe Biden’s domestic policy advisor, “The evidence is clear, investing in equity is good for economic growth.”

Treasury Secretary Janet Yellen says, “I believe economic policy can be a potent tool to improve society. We can — and should — use it to address inequality, racism…”

While I’m loathe to accuse people of racism, economic inequality is real and should be addressed with serious solutions.

The Federal Reserve’s 2019 Survey of Consumer Finances found that the median wealth of white families was $188,200, compared with $36,100 for Hispanic families and $24,100 for black families.

In part, these wealth disparities can be addressed by reforming Social Security and providing an option for ownership through personal retirement accounts. This would help empower low-income Americans and provide them an alternative to the current pay-as-you-go government tax and spend system.

A starting point — or pilot program — might be allowing working Americans up to age 30, earning up to $30,000 annually, to cease paying payroll taxes and instead invest up to 10% of their taxable income in a personally-owned retirement account.

This proposal would allow low-income individuals to invest and accumulate wealth throughout their working careers. Ownership changes personal reality. Resources that individuals own are allocated according to their personal values, not those of government bureaucrats. When one owns their property, they do not submit their property to political whims.

Countries that have the most economic freedom create the most wealth and grow the fastest. Individual ownership gives every American skin in the game of keeping America a free and growing country.

Ownership of one’s retirement account also means that this wealth can be bequeathed to one’s heirs. This would go a long way toward bridging the current racial gap in intergenerational wealth and providing better opportunities for one’s children and grandchildren.

From 2017 to 2019, our country was pursuing policies of lower taxes, lower government regulation, American energy independence and greater personal responsibility. These policies coincided with a substantial increase in net worth and median income, especially for blacks.

In September 2020, the Fed published its Survey of Consumer Finances. The survey covers the three-year period from 2016 to 2019, just prior to the onset of the coronavirus pandemic.

The Census Bureau’s Income and Poverty report for 2019 found that annual real median household income in the United States increased 6.8% in 2019, the largest annual increase recorded by the Census Bureau going back to 1967.

Black median household income in 2019 increased 7.9%, the largest on record and, per American Enterprise Institute economist Mark Perry, “almost nine times the average annual increase of 0.90% over the last half-century.”

Am I trying to divert attention from the many real economic and social problems in black communities? Certainly not. It’s true — again according to the Census Bureau — that in 2019, blacks, despite representing just 13.2% of the population, represented 23.8% of those living below the poverty line.

But is this due to racism? On the contrary, the data tells us this is substantially affected by family breakdown, not racism.

Where problems exist and where progress is disappointing, government has invariably been the problem, not the solution. Overcoming poverty requires deregulation rather than more cumbersome government programs. It requires every individual adopting an ethos of personal responsibility rather than looking for a handout. Government giveaways and top-down programs only further dependency and inequality.

Given the right set of policies and incentives, minimal interference by government, and a culture that embraces personal responsibility, Americans of all races can make substantial progress. Our nation’s founding Declaration of Independence recognizes the “pursuit of Happiness” as an unalienable right endowed by our Creator, and says that we are all created equal. While governments are instituted to secure these rights, it is not their role to guarantee equal outcomes; but it is their duty to ensure equal opportunity.