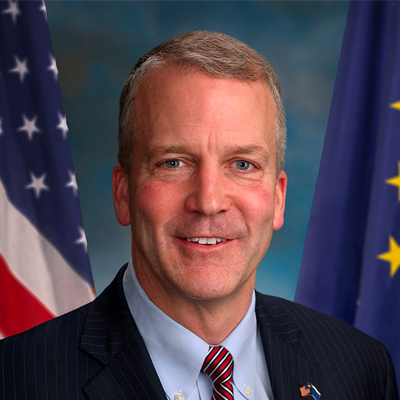 An Energy, Jobs and Climate Plan That Strengthens America

Dan Sullivan represents the state of Alaska in the U.S. Senate. Prior to being elected to the Senate in 2014, he was Alaska’s Commissioner of Natural Resources and also served as the U.S. assistant secretary of state for Economic, Energy, and Business under Secretary of State Condoleezza Rice. He is currently a colonel in the Marine Corps Reserves.

The state that I represent, Alaska, is an energy and natural resources superpower. Since oil began to flow down the trans-Alaska pipeline in 1977, we have been able to provide the country with more than 18 billion barrels of energy. We are proud that we’ve been able to contribute to the country’s economy and national security and our energy has advanced and improved the lives of the people in our state, particularly the people who — before the big oil discovery at Prudhoe Bay and the development of other resources — were among the most impoverished Americans in the country: our strong and resilient indigenous people. There’s still work to be done. But because of energy production, communities have schools, many live near cutting-edge medical clinics, have access to clean water, and life expectancy has risen dramatically. Because of energy production, as one prominent Alaska Native leader puts it: “We are no longer one whaling hunt from starvation.”

There is no doubt that America can work to increase renewables and we can take greater steps to make traditional energy cleaner through technological innovation. But, as we look to reduce global greenhouse gas emissions, we can’t forget how energy production continues to benefit hundreds of millions of Americans across the country — as well as billions across the globe. And we can’t forget how much damage will be done to working families and the environment if President Joe Biden and his climate envoy John Kerry continue to wage war on our energy sector.

Since President Biden has been in office, his administration has been restricting American energy production, purposefully curtailing the building of American energy infrastructure like pipelines, laying off thousands of hard-working Americans in these sectors, and pressuring American financial institutions not to invest in American energy, especially in places like Alaska. At the same time, President Biden is begging OPEC and America’s adversaries like Russia and Iran — countries whose energy production emits far more carbon than our own — to produce more energy.

In a remarkably short period of time, President Biden and John Kerry’s Green New Deal has had dramatic, negative consequences for working families, particularly in terms of energy prices at the pump, home heating, fuel, and natural gas, all of which are spiking as a direct result of these policies.

There is a strong indication, particularly from statements by climate czar Gina McCarthy, that high energy prices for Americans are actually part of the administration’s Green New Deal policies. Higher prices, she has said, “help accelerate the move to renewables around the world.”

My colleagues and I have a competing vision set forward in our Energy, Jobs and Climate Plan that is based on American abundance and leveraging America’s many unique strengths — especially our world-class natural resources, the production of which has actually brought down emissions and has resulted in the lowest carbon-intensive manufacturing in the world.

The Biden-Kerry vision is one of planned scarcity, where Americans have to suffer from higher energy prices to bring down emissions. Our vision emphasizes leadership, clean energy innovation, and expanding at home and exporting abroad resources like natural gas as a central way to lower global emissions — up to 40% by 2050, compared to today.

The Biden-Kerry Green New Deal vision involves telling our allies not to buy American natural gas and instead relies on Russia and OPEC and empty promises from authoritarian regimes about their greenhouse gas reductions.

Our vision recognizes that American natural resources can be leveraged to produce millions of jobs in related U.S. manufacturing sectors, including clean technology. The Biden-Kerry Green New Deal will import more technology from China and relies on critical minerals from that country as well.

Our plan will empower American ingenuity and workers to unleash our nation’s abundant energy resources and innovative technology, expand good-paying jobs for hard-working Americans, maintain reliable and affordable energy for consumers, and boost our economic and national security.

Let me start off with some facts that informed our solutions:

In 2013, President Barack Obama touted the benefits of natural gas: “We produce more natural gas than ever before, and nearly everyone’s energy bill is lower because of it,” he said. “The natural gas boom has led to cleaner power and greater energy independence. We need to encourage that.”

He’s right. Natural gas is an ideal “bridge fuel.” Even President Biden this year said he’s “all for natural gas.”

Unfortunately, John Kerry and the president’s other climate advisors want to restrict natural gas production and its use at a time when we have no substitute. This makes no strategic sense.

Instead, not only should we be increasing the use of natural gas here at home with breakthrough carbon capture utilization and storage technology; we should also be exporting it — in the form of liquefied natural gas — to countries that lack our reserves of this clean-burning fuel source.

The world is craving gas. According to the International Energy Agency, the number of countries that can accept LNG via ship has grown nearly 400% in the past 20 years. The market in the Asia-Pacific is particularly strong, and exporting to some of these countries — Japan, Korea and even to China — is a win-win-win.

Increasing natural gas production will create tens of thousands of good-paying jobs for American workers, deepen our country’s security ties with Japan and Korea, increase our advantage over China, and dramatically and positively impact our trade imbalances in this part of the world.

Let me repeat: Exporting U.S. LNG to China, India and some EU countries would produce 50% fewer greenhouse gas emissions for each unit of U.S. LNG used.

Second, in order to support the renewable energy industry, we need to produce, process and manufacture critical minerals here at home.

Together with our allies, we can grow this sector using environmental and labor standards that are second to none.

Critical minerals are absolutely vital to many important energy and transportation technologies, like solar panels, as well as lithium-ion batteries that power our computers, phones and electric cars.

As it stands, every battery that will be produced for our electric cars and every house that we equip with solar panels will strengthen China and increase global CO2 emissions.

We have many of these minerals, but we lack the industry to produce and refine them.

Our critical minerals are also held back by a protracted and inefficient permitting process.

Domestic development of a mine often takes up to 10 years! That’s simply unacceptable if we want to lead the world with renewable energy technology and our own abundant resources.

Additionally, we need to support U.S. innovation for battery storage technology, bolster microgrids for rural electrification, develop advanced and small nuclear reactors, and support carbon capture technology efforts, among other innovations. This, plus greatly expanding our natural gas production, will lead to a significant increase in domestic manufacturing.

We don’t talk about this nearly enough, but goods manufactured in the United States are 80% cleaner than the world average.

Currently, the United States imports 75% of its goods from less carbon-efficient countries. This runs completely counter to the goal of reducing greenhouse gas emissions.

Our policies to increase natural gas production, build out our nuclear capability, develop our lower-emissions technology, and increase mining manufacturing will also lead to millions of good-paying jobs for hard-working Americans.

Our energy resources provide us with an incredible strategic advantage in the world. We can and we should take advantage of these resource gifts while we work on technologies that create a clean energy future.

We can begin that work now by continuing to be a global leader in energy production, lowering emissions, strengthening our economy and our national security, and ensuring that hard-working Americans are not being forced to sacrifice their livelihoods.

The answers are in our natural gas and in American manufacturing, innovation and smart investments. If we use all of the tools at our disposal, we can not only lower emissions in America, but across the globe.