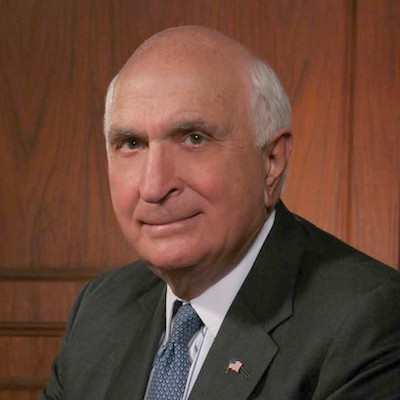 Kenneth Langone is the chairman and chief executive officer of the Langone Family Office. He received a B.A. from Bucknell University and an MBA from New York University’s Stern School of Business. In April 2008, the NYU medical center was renamed the NYU Langone Medical Center reflecting a major gift from Ken and his wife, Elaine. He is a co-founder of The Home Depot and was lead director and a member of the executive committee of its board from 1978 until 2008.

It can be easy to assume that all the sparkling qualities that make America unique are key to our prosperity. We have purple mountains majesty, the mighty Mississippi, spacious skies and amber waves of grain. But the true secret to why our nation has thrived isn’t geography; it’s our dedication to free market capitalism.

I’m talking about more than just an economic theory. This is about our determination to live as free people who have the fundamental right to engage in voluntary exchange with one another, following our own ingenuity, perseverance, and especially, our dreams.

There’s an important reason why the Founders declared that these liberties are divinely bestowed. That’s because no earthly government has the moral right to stand in the way of men and women who wish to work or trade together, creating value and harming no others.

And when that heavenly spark of freedom catches hold, the fireworks of prosperity soon follow.

It’s inarguable that America has been responsible for more innovations, patents and paradigm-changing businesses than any other country since the Industrial Revolution. That’s because our free markets and the rule of law that safeguard them create a hothouse for entrepreneurialism that can create astounding — almost incredible — advances that could never be predicted.

But if I am describing the broad American spirit, Harvard Business School recently took a fine-grain look at the empirical reasons for our success.1 “Our research finds that innovation flourished in densely populated areas where people could interact with one another, where capital markets to finance innovation were strong, and where inventors had access to well-connected markets,” they concluded. They added: “Places that were economically and socially open to disruptive new ideas tended to be more innovative, and they subsequently grew faster.”

In other words, it’s not just that New York City has a splendid natural harbor. It’s also that the people in that shining community can trade freely with one another, which leads to new ideas — ones that improve human lives and raise the standard of living for everyone.

Here’s another crucial insight from that report: “If innovation permits new entrants or small business owners to catch up with incumbent leaders, then innovation should lead to lower income inequality.” Now there’s a concept that all Americans, no matter which party you root for, can get behind.

I am reminded of the 3,000 multimillionaires who are colleagues of mine at Home Depot, the company I co-founded in 1978. An initial $25,000 stake in the company is worth $150 million today. Each of the 3,000 multimillionaires began their careers wearing an orange apron at one of our stores, whether they were working the aisles during the day or stocking the shelves at night. Many on the political left regard people like them as “fat cats” who aren’t “paying their fair share.” But that’s a form of intellectual laziness. I knew them when they were thin cats, helping customers pick out faucets or pushing shopping carts in from the parking lot.

My own working life began in the 1950s as a ditch digger for the Long Island Expressway. Another Home Depot co-founder, Bernie Marcus, was a pharmacist from New Jersey. Yet another, Arthur Blank, was an accountant from Long Island. When Bernie first called me in 1978, he told me he had three children, no health insurance, no money and no job. But he did have a breakthrough idea for a home improvement store, and so I said, “Let’s make it happen together.” This was during the depths of the Jimmy Carter recession, when interest rates were at about 20%. But we offered stock compensation, making workers part of the enterprise. And we listened to what our customers, not the government, wanted.

We worked hard, and we worked together. In fact, if the definition of a successful person is “self-made,” then I’m a failure. There aren’t enough seats in Yankee Stadium for all the people who helped me along the way: teachers, colleagues, friends and family members. I am anything but self-made.

But there is a big difference between the kind of economic dynamism created by voluntary cooperation and economic dependency, when constituencies and companies clamor for subsidies, erect barriers to competition, and expect the government to pick winners and losers. The former made America the greatest nation on earth; the latter threatens to ruin us.

Yet all too often we hear voices from Washington bad-mouthing the free market and arguing for new regulations that will only hamper the economy and tie the hands of entrepreneurs large and small. Rather than praising innovation, they demonize success.

When I get together with business owners, whether they are employers of thousands or only a half-dozen, we don’t waste our time seeking scapegoats for the unemployment rate or devising ways to demagogue the nation’s low morale. Our bottom line is made from solutions, not problems.

Remember, the government doesn’t produce anything; it simply takes money from the earnings of its citizens, or worse, borrows against it and then spends it, often in ridiculously wasteful ways.

For some on the left, the only basis for economic growth is the helping hand of the government. Sen. Elizabeth Warren (D-MA) displayed that narrow thinking when she once complained, “You moved your goods to market on the roads the rest of us paid for. You hired workers the rest of us paid to educate.”

Well, as someone who has actually helped run a trucking company, hired thousands of employees and built a school, I’m glad to explain. The roads that the government builds and maintains are crowded, crumbling and unsafe. Instead of helping move goods to market, they are in fact one of the biggest hinderances to transportation and logistics. The public schools that Warren touts actually shovel bushels of money into corrupt bureaucracies while routinely producing dismal results. The only reason Americans are forced to rely on these bloated, broken systems is because authoritarians like Warren fight tooth and nail to prevent free market alternatives — yes, capitalism — from offering solutions.

When I debated Warren recently on a CNBC show, I asked if she would support a measure allowing wealthy Americans like me to voluntarily opt out of receiving Social Security. No, she insisted, it’s a government program, and I am forbidden to return the money, no matter my net worth. A revealing moment. For Warren, efficiency and common sense are dispensable; the most important value is that the government should be in charge.

Here’s the good news: American capitalism can provide solutions with broad bipartisan appeal to voters. When new businesses flourish, income inequality goes down — pleasing investors and helping solve a problem Democrats claim is their top priority. When there is competition in education — enabling parents the freedom to choose the best option for their children — those future citizens and workers get a better chance at success, and struggling communities have the best chance to break free from the cycle of poverty.

Our business world could use a fresh injection of capitalism, too. Surely, a wide majority of Americans can agree that we should end corporate welfare, sweetheart subsidies and other kinds of cronyism. No one would cheer louder than me if we did. Or how about eliminating all forms of occupational licensing so that ordinary, enterprising Americans can enter professions without being forced by the government to receive burdensome and redundant credentialing.

Ten or 20 years ago, the kinds of ideas and the basic commitments I’ve outlined here were commonplace, not just on Wall Street and in board rooms, but on Main Street and in dining rooms too. A commitment to competition and free exchange was the bedrock not just of the Republican Party, but the Democratic Party too.

Now, too many people on both sides think that America’s great economic dynamism is just tax revenue waiting to be collected and spent on ideological pet projects. Some want to bend our engine of prosperity into a wheelbarrow for socialism while other radicals are pushing a resentful economic insularity and tribalism that our ancestors came to this country to escape.

Those pathways lead into a dark forest filled with the dangers these warped systems have unleashed on mankind so often throughout history. Even the most radical of the zealots knows deep down that these authoritarian systems will collapse without at least some free market activity.

The way forward for us has been lit already. Americans need only be convinced of something they already believe. The pathfinders are not just luminary leaders like Jefferson, Coolidge and Friedman. They are the small business owners in your town: the grocer or barber or florist or farmer. Here’s the secret: When you buy a product or service from them, both of you benefit, and the community around you improves that slight bit too.

Those are the actual things we can achieve together, not some government slogan. That’s real capitalism, not some dusty textbook. When Americans are truly free to follow their own passions, there’s nothing we can’t achieve together. Let’s prove it to the world, and ourselves, once again.