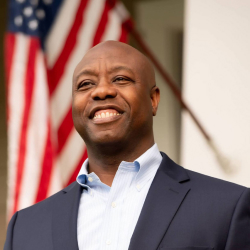 A Plan for Safety and Healing in America

Senator Tim Scott was born and raised in North Charleston, South Carolina. He is the first Black man to be elected to both the U.S. House and Senate. Since joining the Senate in 2013, Senator Scott has been a national leader on education, justice and fairness, workforce development, and opportunity for all Americans.

In 2015, then-North Charleston police officer Michael Slager pulled over Walter Scott for a faulty brake light. Scott, a 50-year-old forklift operator, fled his car. After a chase on foot and brief scuffle, Slager fired eight rounds into Scott’s back as he was running away. Following the incident, Slager filed a police report saying he felt threatened because Scott had taken his taser.

Up until that point, most people in our community were inclined to take the word of police officers based on a police report — to assume that it was an accurate depiction of what happened. In the case of Walter Scott and Michael Slager, as well as other well-known incidents in the years since, bystander video of the incident that conflicted with the reported account shattered that preconception in an instant.

The fallout from Walter Scott’s murder shook South Carolina and our entire nation. If a picture is worth a thousand words, a video is worth a thousand pictures. That video led me to conclude that we need body-worn cameras on every officer and better reporting on officer-related shootings.

To that end, I introduced the Safer Officers and Safer Citizens Act, bipartisan legislation that would have helped provide body-worn cameras to state, local, and tribal police departments across the country. I also introduced the Walter Scott Notification Act, which simply said states needed to improve reporting on the circumstances of officer-involved shootings. Unfortunately, it proved difficult to convince some of my fellow senators of the urgency to take action.

In 2018, I thought we may be able to finally find common ground on a piece of criminal justice legislation when the Senate unanimously passed my bipartisan anti-lynching legislation. But rather than pass my bipartisan bill, House Speaker Nancy Pelosi kept it in purgatory for more than a year only to introduce identical legislation under a different name in order to claim ownership of the issue. Democrats prioritized a political win over getting meaningful reform across the finish line.

I’ve long known we needed to eat this elephant one bite at a time. I didn’t think there was political will in Congress for comprehensive reform. What I didn’t anticipate was the lack of political will in Washington to get anything done.

Over the years, I’ve warned Democrats on Capitol Hill about the danger of failing to act. I repeated the same warnings last year on the Senate floor. We hadn’t learned our lessons about the danger of preserving the status quo, and the nation was again reeling from another tragedy.

For more than nine minutes, the world watched the horrifying video of then-Minneapolis police officer Derek Chauvin kneeling on George Floyd’s neck until he no longer had a pulse.

Though this wasn’t the first time many of us had seen or heard of such a tragedy, the video caused an awakening across our country. It’s one thing to know about the inconsistencies in our justice system, but it’s another thing entirely to witness a man take his last breath on the screen of your phone.

If the deaths of Eric Garner, Walter Scott, Breonna Taylor, and countless others chipped away at our collective consciousness, George Floyd’s murder caused the dam to burst. Our newfound national self-awareness resulting from this tragedy sparked conversations about race, justice, and policing around the world. I knew we had to harness this wave of opportunity to make an impact with meaningful reform.

My team and I responded by putting together the JUSTICE Act. My bill was aimed at bringing Americans together to solve the serious shortcomings in our system of policing. We sought input from both Republicans and Democrats, activists, and members of the law enforcement community. Many of the provisions we included enjoyed bipartisan support. JUSTICE would have incentivized law enforcement agencies to ban chokeholds, improved data collection and record keeping on use of force that results in death or serious harm, increased funding for de-escalation training, strengthened penalties for falsifying police reports, and more.

But rather than debate these ideas on the Senate floor, Democrats blocked my bill. I gave them the opportunity to offer at least 20 amendments, but they still refused.

Reasonable people should be able to agree that more training for officers will result in better outcomes for the communities they serve. By extension, it seems obvious that staffing better-trained departments with character-driven officers requires more resources. Democrats went in the exact opposite direction.

In the absence of adequate resources to do a dangerous job, many officers resigned and response times went through the floor. With a diminished police presence on the streets, violent crime skyrocketed in major cities.

In 2020, homicide rates in our country’s largest cities increased by more than 30% — the largest one-year increase ever recorded in our nation’s history. Murder rates shot up by 82% in Portland, 72% in Minneapolis, 36% in Los Angeles, 44% in Phoenix, 40% in Philadelphia, and 45% in New York City. This year, the homicide rate has continued to rise, to say nothing of the increase in violent crime more broadly.

The sad reality is that the communities the Democrats claimed to be helping are the very folks most harmed by under-resourced police departments. Having grown up in some of the poorest parts of South Carolina, I’ve witnessed this firsthand. Safety is a foundational element in our hierarchy of needs. Taking away security from poor people is both immoral and illogical. We know that.

Case in point: Minneapolis. The City Council’s decision to cut millions of dollars from their police budget was a knee-jerk, political reaction to the tragic death of George Floyd. At a time when the community needed stability and order, police did not have the resources to do their jobs. Without support, many officers resigned, and crime spiked. Unsurprisingly, the poorest corners of Minneapolis were hit hardest. The Fifth Ward, which has the city’s highest concentration of poverty, saw an increase in homicides, robberies, shootings, and stabbings. The disastrous impact on this neighborhood — just down the street from where Mr. Floyd was murdered — proves that the liberal “defund the police” movement was a reaction based on political pressure, rather than a well-reasoned solution to a very real problem.

Though I was discouraged by the Democrats’ refusal to act last summer, I came back to the table and have spent the better part of this year working to implement the reforms I’ve been pushing for years. The biggest misnomer in this debate is that there is no common ground. Better recruitment, more training, a culture of accountability —these are all things both sides want. A Gallup poll conducted this summer found that 80% of Black people wanted the same level of policing in their neighborhoods or a higher one. And the largest law enforcement groups in the country supported my good faith efforts with Sen. Cory Booker (D-NJ) to create compromise legislation. With a shocking 51% increase in officers killed in the line of duty so far this year, it’s no surprise that all sides are desperate for solutions that create a safer environment for both officers and the communities they serve.

Despite months of negotiating, Democrats once again squandered an opportunity to create meaningful change that would make communities across our country safer. I’ve heard from and spoken to the families of the victims who have lost their lives at the hands of police. Acting on the areas where we agree — banning chokeholds, limiting the transfer of military equipment, increasing mental health resources, and more — would have brought justice to these families. Instead, the left once again let their idea of perfect be the enemy of good, impactful legislation.

Not only does this failure to act risk more lives, but it also misses a crucial opportunity to mend the tenuous relationship between the law enforcement community and communities of color. The responsibility to turn this tide rests on the shoulders of leaders and lawmakers at all levels.

Throughout my years of public service, I’ve met with dozens of family members of those who have lost their lives. Many of those loved ones are seeking justice through reform. When I looked them in the eyes and promised never to walk away from the table, I meant it. For the second time in as many years, my negotiating partners on the other side of the aisle left me at the altar. But I’m still at the table because I know that millions of Americans are counting on us to make our communities safer and heal the divides that others wish to exploit. I remain optimistic we will get there.